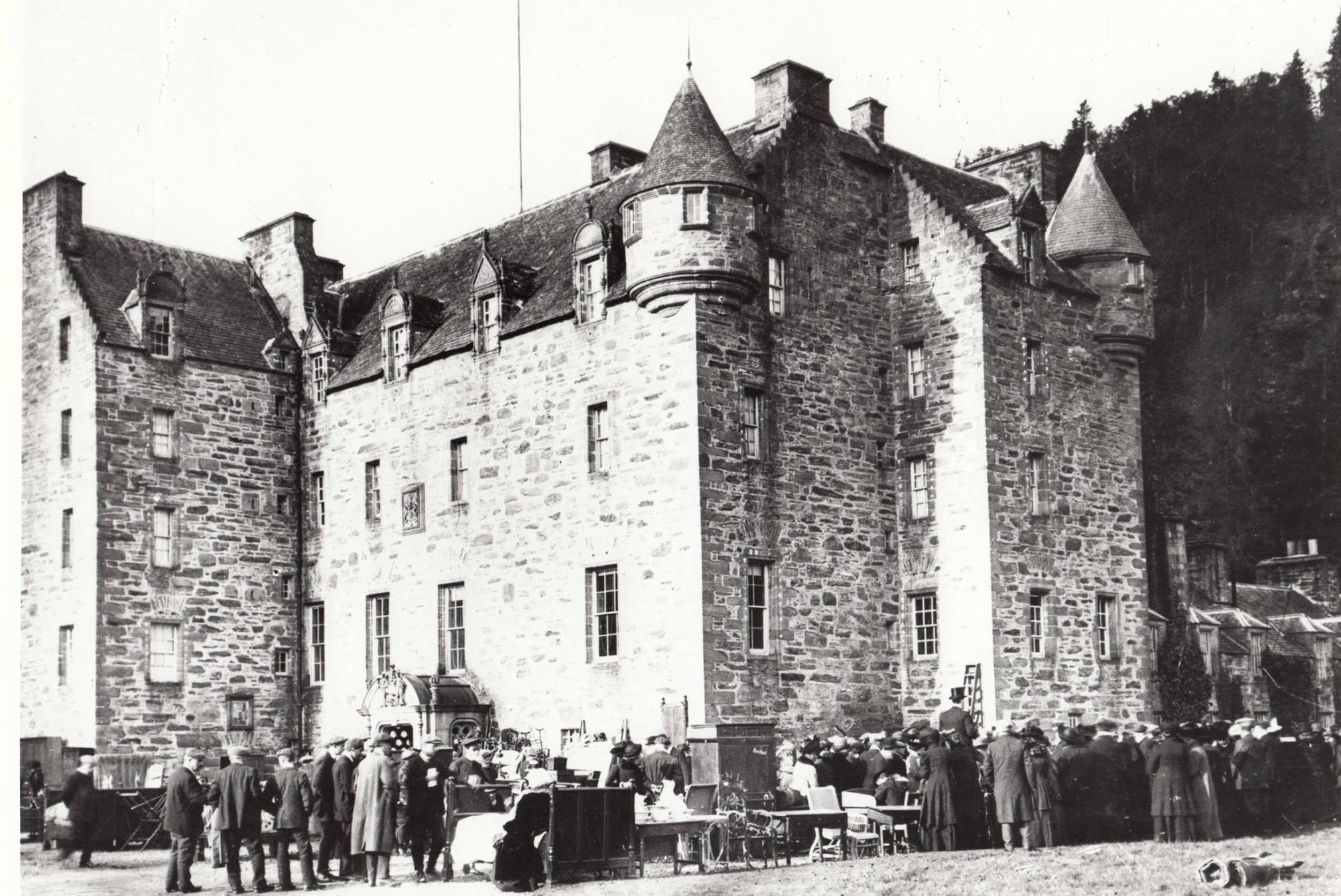 Claims, that the Menzies are descended from a mythical “Scottish” King Mainus of 33BC, have been made but may be dismissed as ill-founded. As with several old established Scots families, the Menzies were of Norman origin, descending from Robert de Maineriis of Mesnieres near Rouen in Normandy. Then settling in Etal, Northumberland in 1166. The name becoming variously Meyners, Maynoeurs and Manners. It seems probable that a branch of this family was granted lands in Scotland in the 12th Century and eventually became established in the Central Highlands. Variations of the name appear in early charters. The first recorded Menzies being Anketillus de Maynoers whose name is appended to a charter relating to a donation to the Abbey of Holyrood during the reign of William the Lion (d. 1214).

The earliest definitive ‘Chief’ was, however, Sir Robert de Meyneris (possibly the son of Anketillus) who was at the court of King Alexander III and became Chamberlain of Scotland in 1249. Sir Robert presumably received a grant of lands in West Atholl. The earliest existing Menzies document (c. 1240) refers to the confirmation of the lands of Culdares and Duneaves by him to Sir Mathew of Moncrieffe. The grant of lands to Sir Robert included 'the following' which added the element of clanship to the feudal relationship and the name in the Gaelic, Meinnearach.

Sir Alexander Menzies, son of Sir Robert, was granted the lands of Aberfeldy and Weem with patronage of the Church of Weem in c. 1266. In 1312-14, the family’s loyalty to Robert the Bruce against Edward I of England, was rewarded by grants of lands in the Highlands, Glendochart, Finlarig and Glenorchy. Also further lands in the Abthane of Dull, and in the Lowlands, Durisdeer in Nithsdale. In succeeding years the extent of the lands held by the Menzies' fluctuated with legalistic exchanges and marriage endowments. And overt usurpation, in the manner typical of territorial transactions of the feudal-clan system of the Highlands. Finally settling with the territories around Weem, the Appin of Dull and Rannoch. These lands remained in the possession of the Weem Menzies' until the death of Sir Neil Menzies, the last of the main line in 1910.

The first residence of the Menzies Chiefs at Weem, the 'Place of Weem', was built in 1488 by Sir Robert Menzies, the eighth Chief after the first Sir Robert. Before this, Comrie Castle was the family seat. The new house was to serve the family but for a short time. In 1502, the burning down of the house was the result of a dispute with a neighbour over the rights of the lands of Fortigall and Rannoch. Also lost were the early records of the origins of the Menzies. Restitution was ordered by the Monarch, James IV who erected the Menzies lands into the Barony of Menzies in 1510, the Chief being styled Menzies of Menzies (or Menzies of the Ilk) and the Castle, Castle Menzies.

In 1665, Sir Alexander Menzies of Menzies was created a Baronet of Nova Scotia and this title continued to the 8th Baronet, Sir Neil who died without heir in 1910. After his death the Menzies’ estates were divided and auctioned by his Trustees. Also sold were the Castle and its contents including many Clan relics and the contents of the muniment room which were apparently bundled into lots, sold and dispersed. Tragically with them, four hundred years of documented history of the family and district. With the extinction of the main Menzies of Weem line, the Clan was therefore without a Chief. Until in 1957, the lineal heir of Colonel James Menzies of Culdares, a prominent Covenanting officer and cousin of the first Baronet, petitioned the Lyon Court. And so Ronald Steuart Menzies of Culdares and Arndilly obtained arms in the title of “The Menzies of Menzies”. His son, David Steuart Menzies of Menzies is now the present Chief.

The loyalty with which the Clan had supported Robert the Bruce was extended to the subsequent Stewart dynasty, to which the Menzies' of Weem became associated through the marriage of Sir Alexander de Meyners (1235-1320) to Gilles (Egidia) Stewart, daughter of James Stewart, 5th High Steward of Scotland. And that of James Menzies of Menzies in 1540 to Barbara Stewart, daughter of the third Earl of Atholl and second cousin to Lord Darnley. The Menzies Chiefs embraced the reformed religion but, nevertheless, supported the early attempt to restore the Monarchy during the Commonwealth. Loyalties to the Royal House of Stuart and to the Establishment were later to become divided however, and Captain Robert Menzies, elder son of the first Baronet sided with the Government forces under General Mackay at the Battle of Killiecrankie (1689). Whilst other Menzies', principally those of Pitfoddels, who adhered to Roman Catholicism, fought on the opposing Jacobite side under Viscount Dundee.

When the “Old Pretender, the Chevalier St. George" made a bid for the throne of Scotland in 1715, the Menzies' of Culdares, Bolfracks and Shian were among the clans who rallied to the call. The then Chief, Sir Robert Menzies of Menzies, was but nine years old and was represented by his great-uncle Captain James Menzies of Comrie as his regent (and tutor), who considered it prudent not to commit his ward to the enterprise. Captain James, the second son of the 1st Baronet, had fought at Killiecrankie with his brother on the Governments side and became Captain of the Clan so long as the Chief remained a minor. In the 1745 rising, Sir Robert adopted a neutral position and took no active part, but the Clan was “out” under Menzies of Shian who subsequently paid dearly with his life for the cause. The Chief, nevertheless gave to Prince Charles the hospitality of his house for two days during the ill-fated retreat from Stirling to Inverness in 1746 which ended in the tragedy of Culloden.

Scotland is indebted to the Menzies for the introduction of the larch tree which now flourishes all over the Highlands. Menzies of Culdares, “Old Culdares” who had been pardoned for his participation in the 1715 Jacobite Rebellion, brought the first larches from the Austrian Tyrol in 1737 and presented them to the Duke of Atholl. Two of the original saplings, now grown to a great size, can be seen besides Dunkeld Cathedral. In the nineteenth century Sir Neil Menzies of Menzies, 6th Baronet, actively promoted tree planting and agricultural improvements which were continued by his son Sir Robert. Another branch of the family, Pitfoddels, now also extinct in the male line, has left as a memorial the Catholic College of Blairs in the Dee Valley, founded by the last representative of the line.